What is shoulder instability? 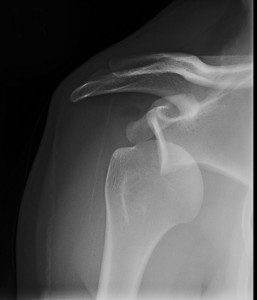 Shoulder instability represents a spectrum of disorders, the successful management of which requires a correct diagnosis and treatment. The boundaries of this spectrum are represented by a subluxation event (a partial dislocation which spontaneously reduces), to complete dislocation which often requires anesthesia to reduce the shoulder. The majority of instabilities are traumatic in nature and the ball of the shoulder is unstable toward the front of the shoulder. This usually occurs from a traumatic episode sustained while the arm is abducted and externally rotated (the throwing position). Usually a shoulder dislocates when the arm is contacted forcefully in the throwing position. This type of dislocation avulses the soft tissue restraints in the anterior aspect of the shoulder. This avulsed tissue is called a Bankart lesion and often does not heal properly, making recurrence likely.

It is very important to distinguish laxity, which is normal, from instability. Two athletes may have the same degree of looseness on exam, but only one states that this is what causes their symptoms. A person that has sustained a frank dislocation will often present with instability. 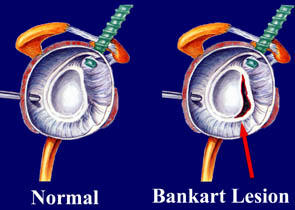 Does age play a factor in treatment?

Yes. The older a patient is at the time of initial injury, the lower the chances are for developing recurrent instability. Patients under the age of 20 with traumatic dislocations have a substantially higher rate of recurrence (greater than 90%).

It is for this reason we have become more aggressive in recent years in recommending early repair for this group of patients. We believe early repair reduces the likelihood of further injuring the shoulder with additional episodes of dislocation.

Patients that are over the age of 40 at the time of their first dislocation should be closely evaluated for a rotator cuff tear, as this is common in the older age group.

What is the treatment for instability?

Surgical treatment consists of arthroscopic surgery to reattach the anterior capsule. This is called a Bankart repair and is done as an outpatient. Return to athletic participation is usually at 3 months after rigorous rehabilitation. The most common risk associated with this surgery is recurrence, which was approximately 10% in recent studies.

If the direction of dislocation is mainly posterior (usually occurring with the arm in front of the body such as the blocking position), then treatment is usually with an aggressive rehabilitation program. This represents a more difficult pattern of instability. If the patient fails conservative treatment, surgery is directed at tightening the posterior structures. The results for this type of instability are less favorable and recurrence is more likely than anterior dislocators.