What is patellar tendonitis? 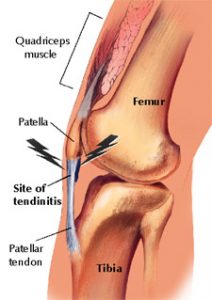 The patellar tendon connects the kneecap (the patella) to the shin bone. This is part of the ‘extensor mechanism’ of the knee, and together with the quadriceps muscle and the quadriceps tendon, these structures allow your knee to straighten out, and provide strength for this motion. The patellar tendon, like other tendons, is made of tough string-like bands. These bands are surrounded by a vascular tissue lining that provides nutrition to the tendon.

What are the symptoms of patellar tendonitis?

Patellar tendonitis usually causes pain directly over the patellar tendon. Your doctor should be able to recreate your symptoms by placing pressure directly on the inflamed tendon. The other common symptom of patellar tendonitis is pain with activities, especially jumping or kneeling. Less common, but not unusual, is swelling around the tendon itself.

X-ray tests are usually performed to confirm there is no problem with the bones around the knee. Occasionally, a bone spur is seen that can be related to patellar tendonitis. A MRI is useful in patients with chronic patellar tendonitis to look for areas of degenerative tendon.

What is the treatment for patellar tendonitis?

The most important first step in treatment is to avoid activities that aggravate the problem. Your body is the best guide to know how much to rest the injured knee–if an activity hurts in the area of the injured patellar tendon, and then you should rest from that activity.

Nonsteroidal anti-inflammatory medications (NSAIDs) include a long list of possibilities such as Ibuprofen, Motrin, Naprosyn, Celebrex, and many others. Patellar tendonitis treatment can be improved by these medications that will decrease pain and swelling. Be sure to talk to your doctor before starting these medications.

Stretching the quadriceps, hamstring, and calf muscles prior to activity is very important once you do resume activities. Getting into a good stretching habit, even once the symptoms resolve, will help prevent a recurrence of the problem.

Treatments Icing the area of inflammation is an important aspect of tendonitis treatment. The ice will help to control the inflammation and decrease swelling. By minimizing inflammation and swelling, the tendon can return to its usual state and perform its usual Strapping/bracing kneefunction. 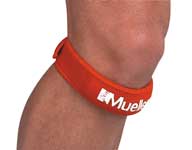 Occasionally, your doctor will provide a support strap (called an infrapatellar strap or a Chopat strap), a knee brace, or custom orthotics. The benefit of these measures in the treatment of patellar tendonitis is not well known, but some patients find complete relief from using these products.

Is surgery ever needed for patellar tendonitis?

Exceedingly rarely. On some occasions, patients have persistent patellar tendonitis symptoms despite the treatment mentioned above. In these patients with chronic patellar tendonitis, who have tried the above treatments for at least a year, surgery can be considered. Surgery is usually considered if a portion of the tendon can be seen as degenerative on the MRI.

Jumper’s knee is believed to be caused by repetitive stress placed on the patellar or quadriceps tendon during jumping. It is an injury specific to athletes, particularly those participating in jumping sports such as basketball, volleyball, or high or long jumping. Jumper’s knee is occasionally found in soccer players, and in rare cases, it may be seen in athletes in nonjumping sports such as weight lifting and cycling.

Overtraining and playing on hard surfaces have been implicated as extrinsic risk factors.

Should I get an injection?

This should be reserved for chronic tendonitis that has not responded to other treatments that have been intensively tried for at least 2 months. The injection should never be placed into the tendon but rather around it.