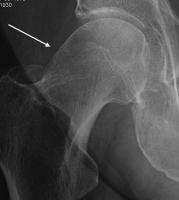 Femoroacetabular impingement or FAI is a condition of too much friction in the hip joint. Basically, the ball (femoral head) and socket (acetabulum) rub abnormally creating damage to the hip joint. The damage can occur to the articular cartilage (smooth white surface of the ball or socket) or the labral cartilage (soft tissue bumper of the socket).

FAI generally occurs as two forms: Cam and Pincer. The Cam form (Cam comes from the Dutch word meaning “cog”) describes the femoral head and neck relationship as aspherical or not perfectly round. This loss of roundness contributes to abnormal contact between the head and socket. The Pincer form (Pincer comes from the French word meaning “to pinch”) describes the situation where the socket or acetabulum has too much coverage of the ball or femoral head. This over-coverage typically exists along the front-top rim of the socket (acetabulum) and results in the labral cartilage being “pinched” between the rim of the socket and the anterior femoral head-neck junction. The Pincer form of the impingement is typically secondary to “retroversion”, a turning back of the socket, or “profunda”, a socket that is too deep. Most of the time, the Cam and Pincer forms exist together.

FAI is common in high level athletes, but also occurs in active individuals.

How is it diagnosed?

Early diagnosis of FAI is important. Left untreated FAI causes cartilage damage and osteoarthritis, which is often irreversible. The diagnosis can be straightforward or a diagnosis of exclusion. Most patients can be diagnosed with a good history, physical exam, and plain x-ray films. A primary symptom of hip impingement is stiffness in the groin or front of the thigh, and/or inability to flex their hip beyond a right angle. Frequently there is pain in the groin region during or after the hip has been in a flexed position, such as running, jumping or prolonged sitting. The physical exam will generally confirm the patient’s history and eliminate other causes of hip pain. The plain x-ray films are used to determine the shape of the ball and socket as well as assess the amount of joint space in the hip. Less joint space is generally associated with more arthritis.

Often an MRI of the hip is used to confirm a labral tear or damage to the joint surface. The MRI is most helpful in eliminating certain causes of non FAI hip pain including avascular necrosis (dead bone) and tumors.

What studies should my doctor order?

In most cases, a Supine AP Pelvis view and a Hip Cross Table Lateral View are sufficient. As the x-ray films are the most important part of the diagnosis, they should be no older than six months and of good quality.

What are my treatment options? 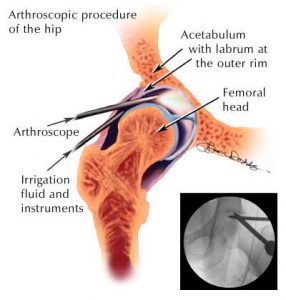 Nonoperative management of FAI is possible; however, it involves a change in lifestyle from active to less active and a commitment to maintaining hip strength.

Operative management of FAI can be addressed via hip arthroscopy or open surgery. In hip arthroscopy, the hip is distracted and an arthroscope is used to make an assessment of the hip joint and treat damage that is found through two to four 1 cm incisions. Often, all of the components of FAI such as the labral tear, damaged cartilage, and friction between the ball and socket can be treated through the arthroscope. Repair of a torn labrum as well as stimulating new cartilage growth (microfracture) are often possible with the arthroscopic approach. A hip arthroscopy involving labral debridement (no repair) and no bony decompression usually takes less than one hour. A hip arthroscopy involving labral repair and FAI decompression may take between two and four hours, depending on the amount of work performed. Care must be taken to avoid damage to the hip’s blood supply during the osteoplasty procedure.

Recovery time from most FAI surgical procedures is about 4 months to full, unrestricted activity. Revision FAI surgery may involve a significantly longer recovery.

What are the central, peripheral, and lateral compartments of the hip?

Do I have arthritis if I have FAI?

Both plain film x-rays and MRI scans are an incomplete view of the cartilage inside the hip joint. It is possible and common to have good joint space on plain x-ray films and no signs of arthritis on MRI and still have significant loss of cartilage within the hip.

Do I have FAI if my hip MRI was read as “Normal”?

At times, an MRI will be read as “Normal” but the clinical history, physical exam, and plain x-ray films indicate FAI. In this situation, further investigation with an arthroscopy may be needed.

My doctor recommended a CT scan of my hip to evaluate for FAI, should I follow this recommendation?

A CT or CAT scan is often helpful in understanding the anatomy of the bones of the hip joint, but not essential to the diagnosis of FAI. One should balance the large amount of radiation to the pelvis/reproductive region with the amount of information obtained. This concern of additional radiation is especially important when 3-D CT scans are performed.

My diagnosis was made after many years of hip pain, is that common?

FAI as an identifiable condition is very new. Many physicians have heard of a hip labral tear but have not heard of FAI.

I’ve been treated for a labral tear with a hip arthroscopy. Could I have FAI, too?

Hip labral tears are associated with FAI. If you have had your labral tear treated and are still having pain, you may have residual FAI. This residual FAI may accelerate the loss of hip cartilage. Labral debridement is not the same as labral repair. 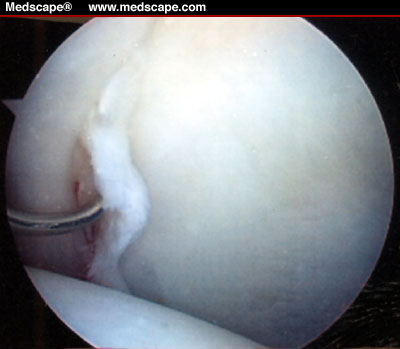 Can my other hip be involved as well?

Yes, it is possible for both hips to have FAI.

I don’t have any pain, what should I do?

Some patients with FAI complain of stiffness and loss of hip range of motion without any significant pain. Progressive loss of motion in the hip can be associated with ongoing FAI. Speak to your physician about your options.

Is this the same condition as DDH (developmental dysplasia of the hip)?

My doctor says that FAI doesn’t exist, why?

Why does FAI occur?

No one knows if FAI is a condition that begins at birth (congenital) or develops during periods of growth (acquired). It is likely a combination of one’s genetics and environment.

How did I get it?

Some experts believe that significant athletic activity before skeletal maturity increases the risk of FAI, but no one truly knows. Significant contact sports (i.e., football) are associated with Cam impingement.

Yes. While the cause is not well understood, patients with FAI often complain of low back pain. This pain is often localized to the SI (sacroiliac joint on back of pelvis), the buttock, or greater trochanter (side of hip). FAI pain typically does not go beyond the level of the knee.

With what activities is FAI associated?

What are the main risks of FAI treatment?

Complications from FAI hip surgery are uncommon but include the following:

How long can I wait before seeking treatment?

Typically, FAI that produces symptoms for at least 6 months should be evaluated for surgical treatment. A longer wait may compromise the cartilage of the hip.

Can I be treated with an injection of medicine or good physical therapy?

Generally, FAI is a chronic condition that does not typically respond to hip injections or physical therapy over the long term. That being said, a good physical therapy program focusing on hip strengthening instead of stretching may be beneficial. In fact, the stretching associated with yoga may make the symptoms worse.

Can I just wait a few years and have a total hip replacement?

Yes. The postoperative rehabilitation of a total hip replacement (total hip arthroplasty) is significantly less than an FAI procedure; however, the lifespan of the replacement hip is shorter in younger patients. The same is true for a hip resurfacing type of procedure such as the hip resurfacing procedure. Both the resurfacing arthroplasty and the total hip arthroplasty involve amputation of the diseased joint surfaces and replacement with man-made materials (i.e., metal, plastic, ceramic) which are subject to wear. The wear results in joint debris which may shorten the life of the replacement. Finally, the use of metal-on-metal hip bearings is controversial in women of childbearing age.