What is the anatomy of the shoulder AC joint?

The top of the wing bone or scapula is the acromion. The joint formed where the acromion connects to the collar bone or clavicle is the AC joint. Usually there is a protuberance or bump in this area, which can be quite large in some people normally. This joint, like most joints in the body, has a cartilage disk or meniscus inside and the ends of the bones are covered with cartilage. The joint is held together by a capsule, and the clavicle is held in the proper position by two heavy ligaments called coracoclavicular ligaments. 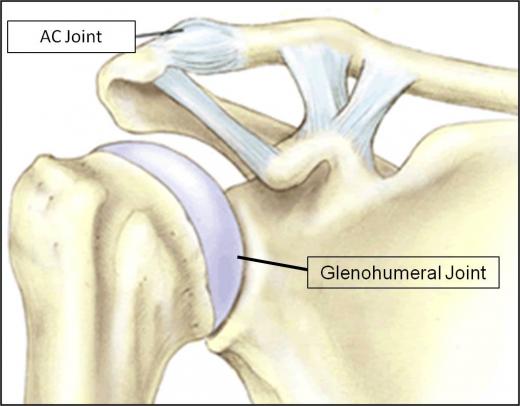 What is a Shoulder Separation (Acromioclavicular Joint Separation)?

A shoulder separation is an injury to the joint where the shoulder blade (scapula) meets the collarbone (clavicle). This joint is known as the acromioclavicular joint or AC joint and is located at the tip of the shoulder. These two bones are held together by tough, sinewy tissues—ligaments–that tie the bones together. One group of ligaments envelope the joint to form a capsule that covers the joint; these ligaments are termed the acromioclavicular ligaments. Another set of ligaments stabilize the shoulder by holding the clavicle in place by attaching it to a bony knob on the surface of the shoulder blade called the coracoid process. These ligaments are called the coracoclavicular ligaments.

There is a pad of cartilage in the joint between the two bones that allows them to move on each other. When these ligaments are stretched (strained) or torn, either partially or completely, the outer end of the collarbone may slip out of place, keeping it from its proper fit with the shoulder blade. Acromioclavicular separation or strain is another term for shoulder separation. 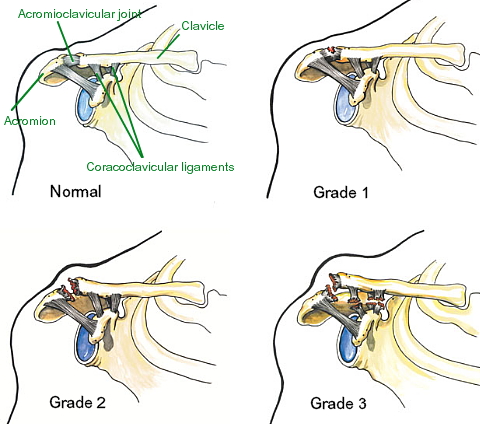 Shoulder separation injuries typically are classified into grades I, II, or III, depending on the severity of the separation of the collarbone from the shoulder blade.

Grade I: the ligaments are bruised or strained but there is no actual separation at the AC joint.

Grade III: separation occurs when the acromioclavicular ligaments and the coracoclavicular ligaments are torn, the collarbone is no longer attached to the shoulder blade, and a prominent deformity or bump may appear at the joint. Similar to a Grade II injury, the cartilage may also be injured.

What are the causes of a Shoulder Separation?

A shoulder separation usually is the result of a fall where the shoulder strikes the ground, by a blow to the shoulder, or by falling on an outstretched hand. The force exerted on the corner of the shoulder pushes the shoulder blade down. Because it is attached to the rib cage, the collarbone cannot follow the downward motion of shoulder blade forcing the ligaments around the AC joint to give, stretching or tearing, and causing the joint to separate partially or completely. It is an injury common to athletes participating in contact sports such as football, hockey, rugby, or lacrosse, or where a person engaging in such activities as soccer, volleyball, bicycling, horseback riding, downhill skiing, or rock climbing may fall onto a hard surface. Any fall or any blunt force to the shoulder in the course of work, household activities, or automobile accident may cause the shoulder to separate. It is not an injury exclusive to athletes.

What are the symptoms of a Shoulder Separation? 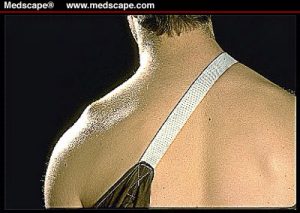 Symptoms will vary depending on the severity of the injury to the shoulder. In general, there will be pain when the injury occurs, shoulder movement may be limited, the top of the shoulder at the end of the collarbone may be tender to touch, swelling and bruising may occur in the shoulder area, and the shoulder may be misshapen.

In a Grade I injury, the symptom may simply be tenderness over the joint with some limitation in shoulder movement. There may be considerable swelling with a Grade II separation as well as pain and difficulty moving the arm, accompanied by a bluish discoloration of the skin as a result of bruising several days after the injury. In a Grade III injury, a popping sensation may be felt due to the dislocation of the AC joint, usually with a noticeable bump or step-off in the shoulder, increasing with a downward pull on the arm. Similar to a Grade II separation, there will be pain, difficulty in arm movement, and swelling and bruising to the shoulder at the injury site.

Usually the diagnosis of a shoulder separation can be made during a physician’s physical examination. To show the extent of the separation and to confirm that it is a separation and not a fracture of the shoulder, an X-ray is taken with a weight hanging from the wrist.

What is the treatment of a Shoulder Separation?

The first step in the treatment for a shoulder separation is to manage the pain. Pain management usually consists of immobilizing the arm in a sling, placing an ice pack to the shoulder for 20 to 30 minutes at a time every two hours, and administering pain medication, either over-the-counter or prescription. As a rule, pain associated with a shoulder separation is proportional to the severity of the separation.

As the pain begins to diminish, physical therapy of the fingers, wrist, and elbow may begin. Usually this therapy consists simply of moving the fingers, wrist, and elbow to prevent stiffness. With further diminishment of the pain, the physician or physical therapist will begin shoulder exercises that will put the shoulder through its range of motion to keep it from becoming stiff or “frozen” and to increase mobility and strength. As the pain decreases, shoulder motion will increase. The shoulder typically becomes pain free in about three weeks with full return to function within two or three months.

Surgery usually is not indicated in grade I, II injuries. Rest, wearing a sling and other conservative treatment usually suffices to restore full functioning. In some cases, such as grade III, where ligaments may be severely torn and where the collarbone is higher than usual, almost sticking through the skin, surgical repair may be required to hold the collarbone in place. The AC joint is relocated and torn ligaments are repaired. The advantages of surgical treatment are twofold: the deformity of the AC joint is corrected and pain will be eliminated where the end of the collarbone is rubbing the skin or muscle. Disadvantages of surgery include risks of infection, continuation of pain in some cases, a scar on the shoulder, and a longer time to return to full functioning. The physician may pursue a conservative course of treatment to see if the shoulder will recover before determining whether surgery is required. Where indicated, however, surgery can be very successful in restoring shoulder function.

When can I return to my sport or activity?

Surgically treated Type III shoulder separations are often not fully restored to normal function for 10 to 12 months, and sometimes even longer.

Remember: the goal of rehabilitation is to return you to your sport or activity as soon as is safely possible. If you return too soon you may worsen your injury, which could lead to permanent damage. Everyone recovers from injury at a different rate. Return to your activity is determined by how soon your shoulder separation recovers, not by how many days or weeks it has been since your injury occurred.