Over 100,000 ACL tears occur each year in the United States. The highest incidence is in individuals 15 to 25 years old who participate in pivoting sports, but ACL tears can occur at all ages. The ACL may be injured with excessive pivoting or twisting of the knee as well as hyperextension, hyper flexion or lateral trauma to the knee. Usually the tearing of the ACL occurs with a sudden direction change or when a deceleration force crosses the knee. The patient often feels or hears a popping sensation, has the rapid onset of swelling, and develops a buckling sensation in the knee when attempting to change direction.

ACL tears have traditionally been repaired via the single tunnel reconstruction. This means that tissue is passed through a tunnel created in the femur (thigh bone) and tibia (shin bone). Some surgeons now feel that this is an oversimplification of the ACL. Therefore, we have begun reconstructing the ACL through a double bundle technique.

Why is Double-Bundle ACL reconstruction performed instead of Single-Bundle?

Traditional ACL repair uses a single-bundle reconstruction using the patellar or hamstring tendons. Studies show an average success rate of 70 to 90 percent. But we believe the double-bundle technique can lead to even better outcomes because it is a more accurate anatomical reconstruction. We believe this new procedure will restore more normal knee function, especially rotational stability.

The rehabilitation period for double-bundle technique is the same as for single-bundle technique: immediate physical therapy and protective bracing and crutches for the first few weeks, followed by light sports activities after three months, with a return to contact sports at around nine months.

What do the 2 bundles of the ACL do?

The ACL, or Anterior Cruciate Ligament, connects the femur to the tibia in the center of the knee joint. It is made up of two functional bundles of tissue, the anteromedial (AM) and posterolateral (PL) bundles. The AM bundle of the ACL primarily controls anterior (forward) movement of the tibia underneath the femur.

The PL bundle of the ACL plays a significant role in rotational stability in the knee, such as in pivoting, twisting and jumping. The ACL is critical to the stability of the knee during daily activities and sports that require twisting, pivoting, balancing, running and jumping. Fetal research has demonstrated that humans are born with a double-bundle ACL. Cadaver research has shown the two bundles are still present at the end of our lives.

What are the details of the surgery? 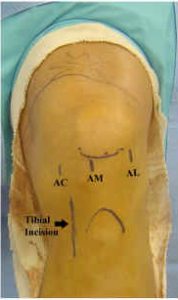 Surgery may be performed at an outpatient surgery center or the hospital. The actual surgery takes approximately 2 hours. You are able to return home approximately 2 to 3 hours after surgery. The operation is performed arthroscopically through 3 small “portals” (5 mm incisions) and a small incision (1/2 inch) on the shin bone to pass the graft material.

For each bundle of graft tissue (AM and PL) one tunnel is created in the femur and tibia. Therefore, four bone tunnels are created in total, measuring 6 to 8mm in diameter.

Guide wires are placed first, to ensure correct tunnel placement, and then the bone is drilled to create the tunnels. The grafts are then passed through the tunnels and fixed to the femur with endobuttons and to the tibia with bioscrews.

We prefer to use donor tendons in the double-bundle procedure, which reduce trauma to healthy parts of the knee. Most ACL reconstruction techniques utilize hamstring tendons taken from the patient. Do to the fact that 2 grafts are needed for the double bundle, most patients do not have enough graft to perform the procedure. Therefore, we use donor tendon from a cadaver.

The biggest concern with allografts is the risk of contracting a serious infection such as HIV or hepatitis. Currently the risk of these infections is 1 in 1.5 million procedures. Unlike organ transplants, allografts are usually not at risk for tissue rejection. Adequate screening of donors is a vital component of allograft procurement. Recent studies have shown the outcome of allograft reconstruction to be equivalent to using one’s own tendons.

Do I have to have my ACL reconstructed to play sports again?

In general, the fibers of the ACL cannot be sewn back together again or repaired. This is due to severe stretch-out and irreversible damage sustained at the time of injury. Therefore, the damaged ligament must be removed and a reconstructed with a new one. Patients, who do not participate in pivoting sports or who do not require knee stability for daily chores and work, may attempt a rehabilitation program to strengthen leg muscles and also wear a brace for pivoting activities. Approximately one-third of patients that injure their ACL will experience relatively few problems and lead a fairly normal lifestyle. Another one-third will have problems with their knee during various athletic activities. These people could live with their knee satisfactorily if they are willing to give up those activities that give them problems. The remaining one-third of patients will have problems with their knee even with simple activities of daily living such as stepping off a curb or changing direction while walking. 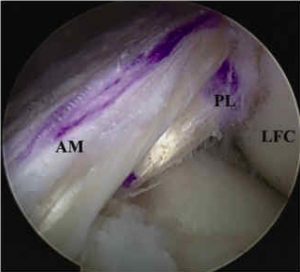 The decision to undergo an ACL reconstruction is highly individualized. Patients who should consider undergoing an ACL reconstruction are those who plan to continue an active lifestyle which places demands on the injured knee. A torn ACL makes the knee vulnerable to re-injury because it is not stable in certain activities. This can lead to the knee repeatedly giving way which damages other supporting structures of the knee joint, including the medial and lateral collateral ligaments and the joint cartilage pads (called the meniscal cartilages). In someone with a recent ACL injury, the risk of associated meniscal cartilage damage may be 30-40%. In someone who has had an ACL injury that has been present for several years, and who may have had several re-injuries to the knee, the risk of associated meniscus damage is 90%. Patients who want to participate in cutting and pivoting sports are advised to consider ACL reconstruction in order to minimize the risk of re-injury. The person who has instability even in daily activities, such as climbing stairs or stepping off a curb- may also need surgery to regain normal knee stability. There is no age limit for ACL reconstruction surgery. Rather, one should weigh their symptoms and desired activity level when deciding on an ACL reconstruction.